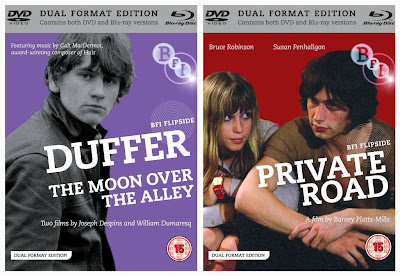 Just a heads up about two films soon to be released on DVD. BFI/Flipside continues to unearth subterranean British treasures that I wonder how I never knew about, like the already released Bronco Bullfrog and Here We Go Round the Mulberry Bush. Joseph Despin and William Dumaresq's Duffer promises to be quite a disturbing picture, but my ears pricked up when I heard that Delia Derbyshire was in charge of the sound design. And Barney Platts-Mills's Private Road just looks like pure confection. What's great about these Flipside releases is that they tend to include supplementary short films of great interest themselves. Mulberry Bush includes Gordon Ruttan's documentary Stevenage, a propaganda piece for Britain's "new towns," and Private Road includes David Tringham's 1974 film The Last Chapter, starring Denholm Elliot as a writer unnerved by a younger fan played by Susan Penhaligon. Read more here and here.
Posted by Ben at 10:22 AM