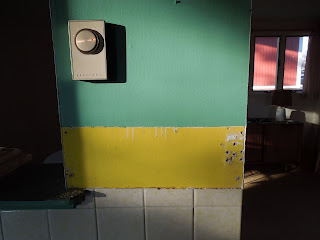 My wife and I have been working on the kitchen lately, trying to install new counters. Today I removed a small piece of wood above the sink whose sole purpose was to hold a wall-mounted can opener. The can opener was evidently much loved -- you can see how many different ways it was attached to the wall over the years.

As I pried off the wood, out popped a hidden photograph and an index card with typed instructions. It's not clear what they were doing there. A memento or just an impromptu wedge to keep the wood flush? Anyway here they are: Bob and Helen. 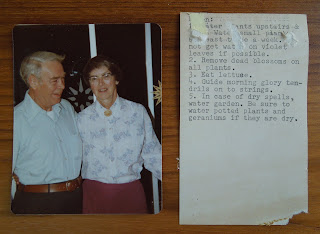 Don't they look great! So cool looking, and so clearly in love. They were the original owners of the home and lived here since the early 60s. Like a Charley and Edie Harper of the north. And here Bob is reminding Helen which plants to water. It almost reads like a love poem.

Here's a short bio of Helen from an alumni magazine. When we bought the home last summer, she was living in a retirement home in town. She had been a widow since the mid-1980s. It appears that she did a lot of updates to the home around that time, including the wallpaper you saw earlier. It struck us that she might have hidden the photo of Bob and herself around that time. She probably wanted it to be there forever.

Then around October or November last year, we read in the paper that she had passed away. We never had the chance to meet her. A few days afterwards, her caretaker came round with a huge keychain of at least twenty or thirty keys to various things around the house. She thought we might need them. We have no idea what any of them open!

We intend to frame the photo as a way of remembering Bob and Helen.
Posted by Ben at 8:29 PM