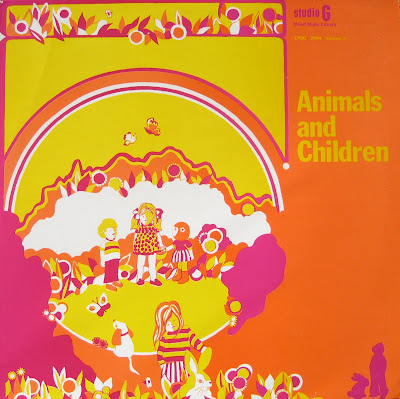 OK sorry, this post is going to be extremely nerdy. Seriously. The record you're looking at isn't a BBC Radiophonic Workshop album, but it sounds like it could be. It's one of my very very favorite records ever! I've been wrestling with my conscience over whether to share it or not, but then I figured ONLY LIKE FIVE PEOPLE READ THIS BLOG ANYWAY SO WHO CARES. I remember finding it forlorn and ignored in a San Francisco record store several years ago. The titles and "remarks" on the back sleeve seemed promising: "electronic fiction," "junior laboratory," "sonic march." Still, I braced myself for disappointment as I approached the listening booth. Library records are a cruel mistress, I reminded myself. The balance between radiophonic fuzzy folk and lame loonytunes rests on a knife edge of nuance and stylistic difference.

But as I needle-dropped a few tracks a funny thing happened. I found myself borne up on a magic carpet of wyrd plinky plonky vintage electronic music, of cacaphonous "zoo atmospheres," twinkly percussion and haunting homespun witchy children's folk. A real time capsule of early 70s Britain and the weird utopian meanings then (and perhaps still) invested in the figure of the "child." And speaking of fuzzy folk, it's worth mentioning how perfectly this album would fit into Jonny Trunk's Fuzzy Felt Folk or Studio G compilations. (I believe the yellow-sleeved first volume of the Animals and Children series is represented in the latter, but not the second nor the equally excellent third). Eric Peters, who contributes four tracks here, is the guy behind "Electro Mind" from that one yellow Chappell library record, along with a few fantastic electronic records on the KPM label. An auxiliary member of the radiophonic workshop if there ever was one. And James Harpham, the guy responsible for the "Witches and the Grinnygog" soundtrack excerpted here, is something like the Gandalf of British film music. He's in fine form here. It's a wonder that he's not better known, although selfishly I must say shadowy obscurity suits him better. Below is a clip of my favorite track from the album, Harpham's "Oriental Dolls."