Over the next few weeks I will be teaming up with friends Unmann-Wittering and A Sound Awareness to celebrate the legacy of the BBC Radiophonic Workshop. The proceedings are already off to a great start with a controversial full post of David Cain's electro-medieval kids record "The Seasons" here. There are exciting plans in the works, including pieces on the "Listen, Move and Dance" series of children's educational EPs, the Delia Derbshire/Brian Hodgson collaboration on the "The Legend of Hell House" soundtrack, the other-worldly "Inventions for Radio" broadcasts, and many other things besides. I'll be pitching in my own two cents shortly. But first, let me briefly sing the praises of my co-conspirators.

A Sound Awareness is my go-to source for cool shit that I've never heard of -- bizarre outsider folk modernist design, avant garde vinyl curios, experimental film shorts, etc. The brain behind the blog is a guy called El Sporto, and to give you an idea of how good his taste is, let me just say that he was the one (although he may not remember it) who purchased my copy of Univers 2000 several years ago, partially financing an engagement ring for my then fiancée, now wife. True story. Check out his amazing blog for posts on visionary Finnish filmmaker Eino Ruutsalo, anti-establishment nuns, and the aesthetic pre-history of Ghost Box. 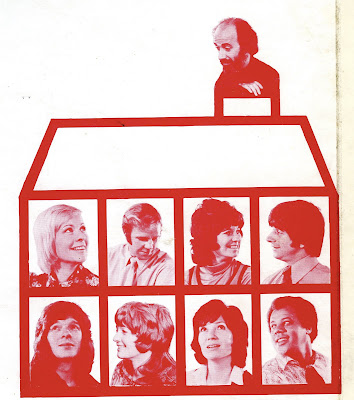 Unmann-Wittering, too, are taste-makers of the highest order. The blog is just one part of an ongoing experimental music project conducted by a duo who rightly describe themselves as "caretakers of sound." Their folk collage paean to Jack Hargreaves is one of my favorite songs, although I have not told them this. And the blog is simply the best archive of English weirdness, analog electronics and forgotten film ephemera that I know of. Buried like treasures in those pages are several fantastic mixes full of film/TV music confection. (I particularly recommend the three-part Various Magic Noises compilation.) I hope I'm not blowing his cover here, but one member of Unmann-Wittering also has an incredible Youtube channel -- a well-edited one-stop shopping place for all your hauntological needs.

And there you have it. So run over and d/l your copy of "The Seasons" and be sure to check in over the coming month for more things Radiophonic.
Posted by Ben at 2:41 PM