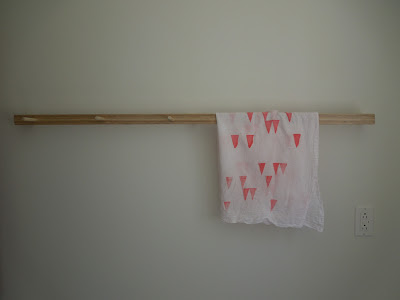 You have probably been thinking, what about Ben's bathroom? It's been a while since I posted any photos of our ongoing home renovation. We've been taking things slow and trying to do things ourselves. Our most recent battle was fought with the downstairs bathroom. Here are some before photos.

May I interest you in some hot pink grout and matching trim? Or a lovely turquoise paisley formica countertop? There were a lot of other things wrong with the room; the previous owners removed the wallpaper but forgot to scrape away the adhesive before re-painting, leaving a nice 5 o'clock shadow that looked like mold. There was also a large shelf on the wall opposite the sink that served no purpose, and a heinous glass shower door that hemorrhaged water onto the floor. An additional challenge was an exposed drain pipe covered with an impromptu stool (more pink grout!). It felt so good to rip that thing out.
We started the project in April. Two months later and here's the finished product! 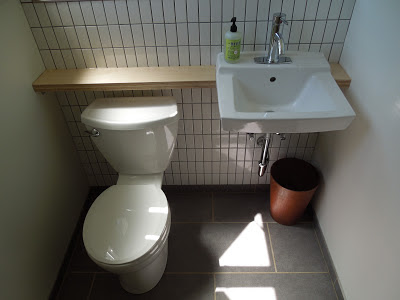 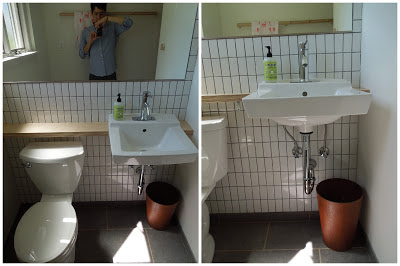 We painted, tiled (wall and floor), replaced the toilet and sink and light fixture, and added a shelf made of doubled-up baltic birch plywood. There was a pretty steep learning curve for the plumbing and woodwork, but in the end everything seems to have worked out. We did everything ourselves! The hardest part was probably attaching the sink to the wall through the tile. I used a circular saw for all the wood stuff. We were inspired by Kathryn Tyler's design for her own beautiful home in Falmouth. We liked the simple white-wood-gray color palette and her idea of using small subway tiles stacked "soldier" style rather than in a running brick pattern. The tiles we used were originally a mosaic tile, the kind glued to a sheet of mesh. But because they were glued together in the wrong pattern, I just ripped them off of the mesh and put them up one by one.
The new Heath Ceramics studio in San Francisco gave us the idea of using two pieces of plywood stacked on one another -- we love the exposed woodgrain. The floor is just a simple porcelain tile from Lowes. Quite a lot of the fixtures were purchased on Amazon -- the faucet, the sink, etc. The sink cost a grand total of $53 including shipping! The idea was to use cheap materials but make them function well and look good together. For example, the light fixture cost $2 at the local hardware store. The big ticket item was the huge mirror, which I managed to crack as soon as I got it home. The people at the glass shop were nice and re-cut it for me, so it just ended up being an inch or two narrower than planned. Above the mirror, the tile extends all the way to the ceiling. 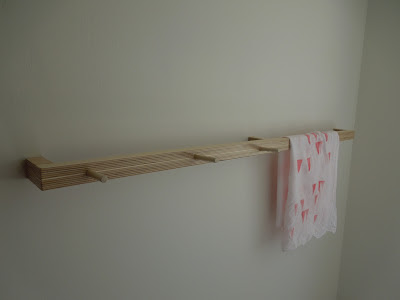 My favorite part is probably our new towel bar. I had some leftover plywood from the shelf, so I decided to make a kind of shaker peg rail that you could hang a robe or a few towels on (again inspired by Kathryn Tyler). One of my mom's great priorities in life is to dry bathtowels properly, so I wanted to give people the option of either hanging them on dowels or folding them over the bar to dry. Since this is a guest bathroom we tried to take into account the needs of both sets of parents for when they visit. The hand towel is made by my friend, the designer Sepi Alavi. It took us a while to figure out what kind of towel hook we wanted next to the sink. I ended up unscrewing a piece from an Ikea towel hook and used a hanger bolt to attach it. We also used an Ikea storage stool to cover up the exposed pipe. 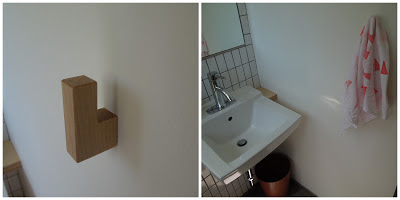 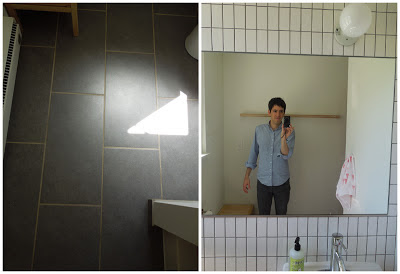 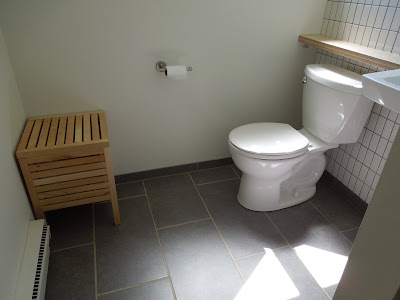 We decided to leave the drop-in shower in place in order to save money. We removed the hideous door and used epoxy to waterproof the remaining screw holes in the fiberglass. Then we installed a shower bar and replaced the shower head. We used a white cloth liner for the shower curtain -- it's nice and light and airy.
It's been a long adventure but we're really pleased with the results. All ready for our summer guests! Longest blog post ever on T&T! 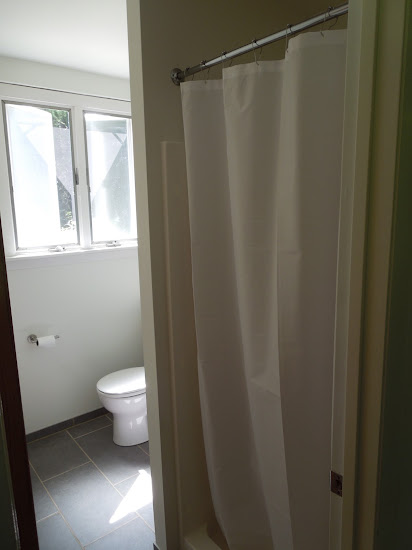