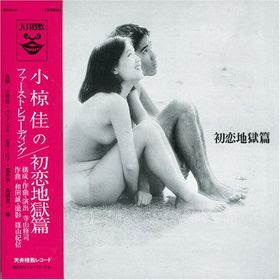 How about a little Japanese nudity for Earth Day? (That sentence will probably get this blog some weird visitors via Google.) This is the soundtrack to the 1968 film Hatsukoi Jigoku Hen (Inferno of First Love), directed by Hani Susumu off of a Terayama Shuji script. I haven't seen the film, and in many ways I don't want to. I mean it looks lovely and all, but I just don't want to ruin the already perfect aural world conjured up by the LP. It's a little unclear just who is responsible for the music. Many sources credit the avant-garde theater collective Tenjo Sajiki, but it just doesn't seem sufficiently drugged out or HEAVY enough for that to be true. Indeed, the key thing about this music is how delicate and fragile it is. I like to imagine that the slightly nerdy guitar tech for Tenjo got together with his girlfriend and cut this album all by themselves while the rest of the band were sleeping off a hangover.

The choral chamber folk of this album is such a welcome change from the usual Japanese acid bluesmanship that people go nuts for on Ebay. (Although I guess one point of continuity would be Carmen Maki, who does a cameo here; I have no idea which track this is.) There's a simple twinkly innocence to these songs that's not all that far afield from Carl Orff. And the ambient dialogue and noises (mostly waves lapping at the shore as the two main characters talk about why they haven't been able to have sex yet) adds a kind of natural musique concrete on top of the harpsichord and guitar. The last song is absolutely devastating -- an inspired documentary moment where presumably non-actors announce the name of the first person they ever fell in love with. Whatever happened to those people? Are they still alive? Did the people they mention love them back? Here are some screen grabs from the film... perhaps I will have to see it. 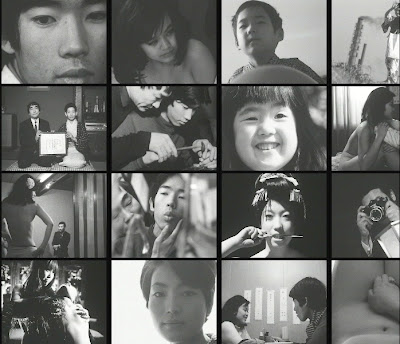