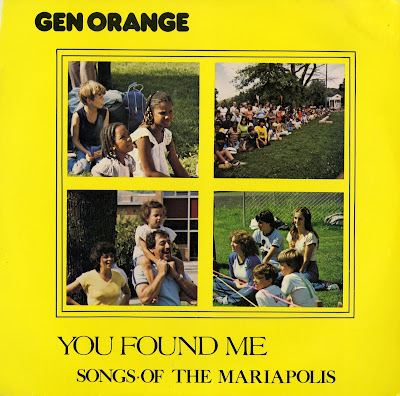 I've been listening to this creepy Christian folk record. I really don't know what to make of it. Gen Orange were part of the Focolare Movement, an Italy-based inter-faith sect that splintered off from the Roman Catholic church.

They are led, or were until recently, by the charismatic and controversial seer Chiara Lubich, whose private visions mapped out the spiritual course of the church. I love the microphone/lawn chair combo in this photo. The more I read about this the more of a Dan Brown novel it all becomes; I feel a bit like Tom Hanks typing this. Some accuse Lubich of brain-washing, etc. Focolare's youth wing is called the "Gen Movement." Every once in a while the gens meet and sing folk songs and eat s'mores (and cut an album?) at the "Mariopolis" festival. New initiates are called "pre-gens" and only advance to "gen" status through some sort of rite of passage. The gens are also coded by color (Gen White, Gen Purple, etc.), but I don't know how this works. Creepy.

The music on this record actually sounds a bit like the folksy indie pop of The Softies or Young Marble Giants. Some nice hand percussion and ham-fisted guitar solos. At other times it goes a bit Wendy & Bonnie-ish. Here are two tracks: "You Found Me" and "Your Silence."