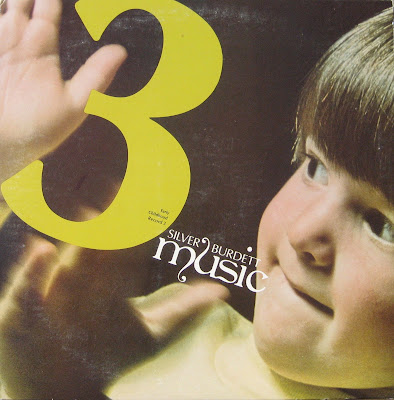 Not that this is all that pressing a mystery, but I've been wondering about the identity of Doris Hays since this post of several months ago. Is she Delia Derbyshire working undercover or not? Well, Paul, you were right -- the answer is no. Despite what this website says, Delia Derbyshire is not Doris Hays. And now I have some evidence to prove it, in the form of several albums in the Silver Burdett "Early Childhood" series courtesy of the Salvation Army. As I perused the titles on the sleeve I noticed several Doris Hays pieces billed as being "Realized on Queens College E.M.S., copyright 1974." I took the records home and played them. The Doris Hays tracks sounded very similar to the ones on the Southern library record posted earlier. Maybe the Southern tracks were made on the same Queens College synthesizer?

Some explaining. Doris Hays is an American composer, born in Tennessee, who now goes by the name Sorrel Hays (the name of her grandmother). Here she is. Apart from writing music she is also an accomplished pianist, and filmmaker (check out her website for a bio and some great photos). As far as her recorded output goes, she's pretty well represented on the Folkways catalog, often in collaboration with pianist Henry Cowell.

But what really interests me is her work in children's music education. Apart from teaching at Queens College, among other places, Hays was also a consultant for Silver Burdett, supervising several series of children's LPs and conducting workshops across the USA from 1974-1984. As far as I know the electronic pieces on the Silver Burdett albums don't appear anywhere else. I don't know why but I'm really happy about the spastic whimsical quality of this music. Having never heard Hays's Folkways albums, I had written them off sight unseen as being too High Church in their avant gardism. I also had some doubts about the logistics of an American composer wrangling a gig with a UK library label. But how wrong I was. The tunes are delightful, and not at all as high-toned and difficult as I thought they would be. Here are two of them.

"The High and the Low of It"


"The Long and the Short of It"


There are some other really cool tracks on these albums as well, weird folksy numbers similar to the "Spin Spider Spin" track on Jonny Trunk's Fuzzy-Felt Folk mix. Er, I think I'm going to keep these in hiding for a future mix, but here's a another clip from the series -- a piece from Morton Subotnick's Silver Apples of the Moon accompanied with earth-mother instructional narration (perhaps Sorrel herself?)

One more Sorrel Hays photo, ripped from an Ebay listing. What a badass!