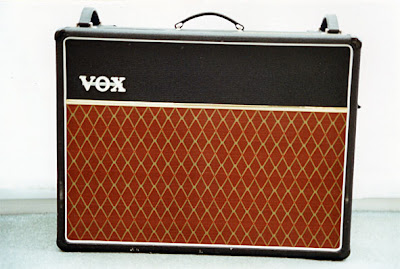 I'm starting to see some best-of lists coming out. My top music experience of 2010 happened, accidentally, last night. I teach at a small school in the middle of the woods. Nothing ever happens around here. But a friend called after dinner and said students were performing final projects in the art building, and that one of them involved a 5 hour long looped guitar sound sculpture. "come get me sounds cool." It was freezing out and snowing softly by the time we got there. Wandering through the bowels of the building I could hear low-pitched sounds pulsing through the concrete walls. There was nobody at all in the atrium where the installation was set up. Just three guitar amplifiers with effects pedals and a wall projection which had run its course and stalled on a final image of a lurching human figure -- the performer? He or she had left by that point, probably to take an exam or something, but the guitar case was still there. And sound, glorious sound. The emptiness of the room seemed almost pre-scripted, as if wandering in out of the snow and "discovering" this wall of sound were an intended part of the experience. Each amplifier was set up to cycle through a common sequence of notes. But they were out of phase with each other, or rather passed in and out of phase, so that sporadically they would "speak" to each other in a rich and resonant chord before sloping back into their own private patterns. Resolve - unresolve - resolve - unresolve. It was quite loud and finally an unhappy looking architecture student wandered out into the atrium and scowled at us. Just simple pulses of sound gathering force and then dissipating, in an endless procession of the same. So beautiful. We were zoned out and completely silent taking it all in, before we noticed how shabby the bench we were sitting on was and started to wonder how many art students had slept with one another on it. We left and then there really was nobody there.
Posted by Ben at 2:15 PM