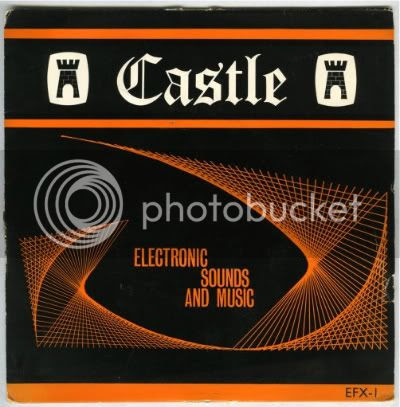 As far as I know Frederick Judd cut two of these electronic 7"s for Castle records in the early 1960s. One of them, entitled "Electronic Themes and Musique Concrête," appeared on one of Creel Pone's "Creelpolation" anthologies of early electronic 45s. This is the other one. Judd was something of a dark horse in early British electronic music. He contributes some of the best tracks on the Studio G release "Electronic Age" in 1970. And here, about ten years earlier, he fires up the ring modulator and floats up into the night sky on a cloud of exhaust fumes and electro scree. The dense squall of feedback and plucked bass and eerie scrapyard sounds is probably not to everybody's taste. It's the sound of fear awakening on a crew of astronauts who has just experienced equipment failure and lost contact with the known world. It's dissonant and scary, to be sure, but there's a kind of peaceful still point at the heart of all the noise if you listen closely.
Posted by Ben at 11:32 PM