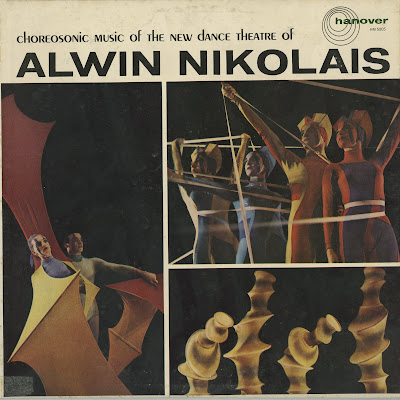 Allow me to introduce Alwin Nikolais and his bells, gongs, cymbals, wood blocks, whistles, tubes, elastic bands, tin containers, rattles, and coils of wire. Nikolais is a pioneer in mixed media, the creator of what he called The Theater of Light-Sound-Color-Motion, for which he composed his own music -- initially percussion pieces performed live on children's toy instruments and automobile parts and later a full-blown concrète psychedelia spun through a huge reel-to-reel tape recorder. I love the liner notes for this album: "maze of colored bars before infinite vista", "a playful exorcizing of imps", "parts of people and things illuminated in glows of colored light", "large sailing and pulsing kite-like shapes"... There was recently a Nikolais retrospective at the New York Public Library but I didn't manage to make it. Anybody go?